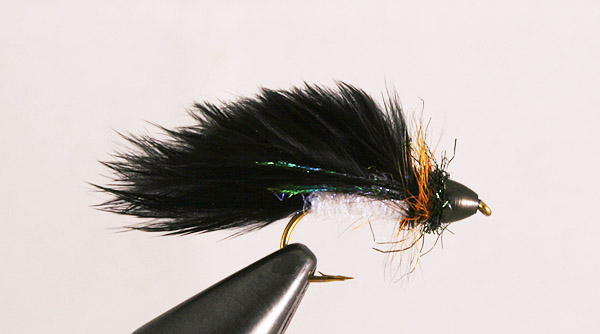 Early in the Trout season streamer flies can be particularly effective, Trout are hungry and baitfish imitations represent a good meal for a hungry fish. A lot of my early season streamer fishing is done on larger rivers like the Clyde with #4 – #10 longshank Woolly Buggers but Trout will chase and eat streamers regardless of where they live so for my local tributaries I scale down to smaller flies. On the smaller streams where the fish dont have so much time to follow a fly and be enticed by its action I pay a little more attention to profile while still allowing for some movement in the flies materials.This fly fits the bill and catches more than its fair share of fish.

Step 1:
Load the conehead onto the fly and apply the lead wire, pushing the lead wire into the cone until it holds the cone in place. Apply a coating of superglue to the lead wire at this point, not only does it secure the lead and conehead in place it also helps prevent colour leeching from the lead into your dubbing.

Step 2:
Attach the thread and wind to the back of the fly creating a smooth taper from lead wire to hook shank as you go and tie in a small clump of Marabou. Only a small amount of marabou is needed, when twisted tight it should be just larger than the diameter of the hook shank. Chickabou is actually a better material for this fly but as most tyers have Marabou in their material collection I have tied the fly using this, just make sure your Marabou is nice and fluffy.

Step 3:
Add a small amount of pearl dubbing to your thread (I’m using Pearl Ice Dub) and wind forward no more than 2mm before tying in another small clump of marabou, trimming the waste marabou butts as you go.

Step 4:
Repeat the previous step adding dubbing and marabou until you are roughly 2-3mm from the back of the cone. There is no need to try and match the lengths of marabou clumps as you go as this will be shortened at a later stage, just make sure the marabou stays on the top of the shank and the dubbing has no gaps.

Step 5:
Tie in 2 short Peacock swords on either side and a furnace hen hackle, the peacock swords should be just longer than the hook shank.

Step 6:
Add a little orange dubbing to your thread and wind to the back of the cone, you still have a hackle to tie down and a tiny dubbing collar to add so be careful not to dub the orange material too thick at the back of the cone (I’ve used Dead Orange Sow Scud Dubbing).

Step 7:
Wind the hackle in a couple of open turns toward the back of the cone making sure the orange dubbing is visible through the hackle.

Step 8:
Colour three inches of your thread with a black marker pen and add a tiny amount of Peacock dubbing to your thread (I’ve used Black Peacock Ice Dub). Whip finish behind the cone and, using an old toothbrush, brush out a little dubbing.
The tying stage is now complete.

Step 9:
Remove the fly from the vice and use your thumb and forefinger to pinch and tear the marabou to the finished length and profile. The trimmed fly should be no more than 3cm long with the wing no more than 1cm high and the front of the wing should taper into the tail to make a sharp point.

If you are lucky enough to fish on small streams with very clear water then the fly will be more effective if the wing and tail are lighter again in bulk and trimmed a couple of mm shorter.

This fly can be fished both up and downstream, dead drifted or with action added. I’ve personally had my best results fishing across and down when using the rod tip or a short strip to move the fly and bring it broadside across the current but no doubt how you fish it best will be determined by the riverbank conditions and the clarity of the water… such is the nature of small stream fishing.
Like all streamer fishing takes can be violent so I prefer a rod with a softish tip and a leader 8-10ft long tapering to around 5-6lb breaking strain, steer clear of double strength co-polymers or expensive flourocarbons as they don’t have the stretch needed and tippet diameter is not the concern it would be when fishing a dry fly.

Good luck and if you fish this fly I’d love to hear how you get on.
Jim