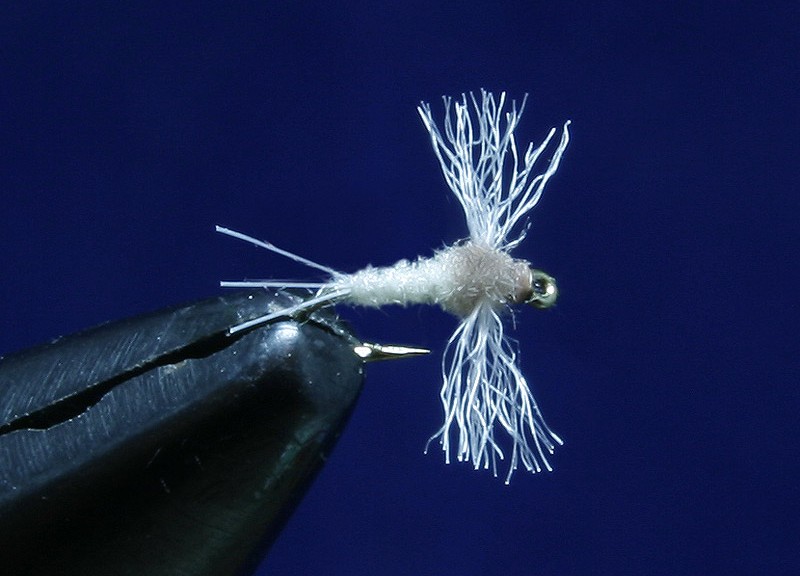 There are a few fly tyers who really excel at the small stuff, Hans Weilenmann and Andy Baird jump to mind quickly. These guys tie simple elegant micro flies but also some really beautiful tiny flies and they tie them with a high degree of skill, I’m afraid I’m a bit more basic. What I look for in any fly that’s below a size 20 is just simplicity, if I can get the size and shape right I’m happy. If it’ll float for a decent period of time with no floatant applied so much the better as oil slicks around the fly stand out even more when the flies are so small.
So on to a couple of basic fly patterns that cover my needs. Aphids and Caenis.

Step 1: Attach the thread to the hook and wind back the full length of the shank.

Step 2: Attach a slim bunch of Fluoro Green Fine Aero Dry Wing trimming the waste off around a third of the way back from the eye.

Step 3: Wrap up the Aero wing body, create a chunky body by overlapping your wraps nearer the thorax.

Step 4: Attach the Fine White Aero Dry Wing on the top of the shank, I generally leave enough hanging over the eye of the hook to make handling and trimming easier.

Step 5: Colour the thread with a Fluoro Green highlighter and wind over the wing base to create a fat head area.

Step 6: Whip finish below the wing roots and trim the wing to length front and back to complete the fly.

Step 1: Attach the thread and wind two thirds of the way back the hookshank before adding the dyed Kapok to the thread.

Step 2: Use the undubbed thread to wind back the remainder of the shank so your dubbing is ready to start just as you reach the end of the hook shank. Dub two thirds of the shank length before colouring the thread with a Fluoro Green highlighterand creating a slightly thicker flat base for your wing.

Step 3: Attach your White Fine Aero Dry Wing to the top of the shank, this wing will be folded back so only use half the density of Aero Wing used on the previous fly. With your thread coloured again wind a fat head and thorax area ensuring you finish with the thread next to the dubbed area of the body.

Step 4: Fold the forward part of the Aero Wing back over the thorax area and secure with your whip finish. Cut off your waste thread.

Step 5: Trim the wing to length to complete the fly.

To represent Black Fly, Aphids of another colour, Smuts or smaller species of Aquatic Midge just alter the body colour to suit. My personal preference is for the Kapok bodied version as I’ve found it to float better and I have a general bias toward dubbed bodies for no real reason other than I like the scraggy “Halo” effect you get even with very fine dubbing. To my eye it just looks a little more alive. That said the Aero Wing bodied version does hold a stronger body colour and that’s why I’ve included both.

Step 2: Attach your Aero Wing with one or two wraps of thread before pulling it round to form a cross with the hook shank and binding it firmly in place with figure of eight thread wraps.

Step 3: Dub some natural coloured Kapok to your thread while the thread is still at the thorax and use the area of undubbed thread near the hook shank to wind back to the end of the hook shank making sure the dubbed area of thread is ready to start just as you reach the tail roots. Dub a slightly tapered body, Kapok is incredibly fine dubbing so if you are very sparing with the amount added to the thread you can overwrap as you get nearer the thorax. I like to use a very small amount of dubbing at a time so I can dub up the body and back down finally coming back up the body in open spirals with bare thread as a rib. On a fly this size it can initially be tricky judging the amount of dubbing to add to do this without getting too fat a body so use one or two layers, whatever you find easiest as the rib is not that important. With the dubbing complete you can now trim your thread tails to length, on the natural they are short so aim for less than a body length.

Step 4: Add a tiny amount of Light Brown Kapok to your thread and cover the thorax area and wing roots using figure of eight turns. Many Caenis patterns you see have a Dark Brown or Black thorax and looking at a natural fly the thorax area can often look quite dark but this is just the top side of the fly, the underside is not much darker than the abdomen. I tend to copy the underside as it’s the side most often seen by the fish, this is not a deal breaker and patterns with a darker thorax do work, this is just my personal preferrence.

Step 5: Finally use your whip finish to form a small head and trim your wings to length. I colour the thread with a brown marker before doing this but again that’s just a personal choice and not hugely important. To get an even and proportional wing length I grab both wings, pull them back and trim just back from where the body stops.

Your completed Aphids and Caenis.

Whenever possible I avoid using flies tied on hooks below a size 20 as I’m not a fan of using tippets narrower than 6X. For me personally I think you either need to be fishing for small Trout or you need to use a full rod, line and leader set up that’s tailored specifically for fishing with really light tippets. By that I mean a light weight soft rod with a stretchy butt to your leader to help cushion shocks, your fish fighting skills should be pretty good as well to avoid break off’s or over playing of hooked fish. It basically crosses over with why I’m not generally a fan of extended bodies on smallish flies, I like to use as big a hook and as strong a tippet as the fish will let me. I just think it’s better for the fish. There are plenty folk who would probably disagree with me and they may well be right but the places I fish most often Iet me get away with my philosophy….. most of the time. When I am faced with situations that demand the smallest of flies though these are the ones I rely on most.