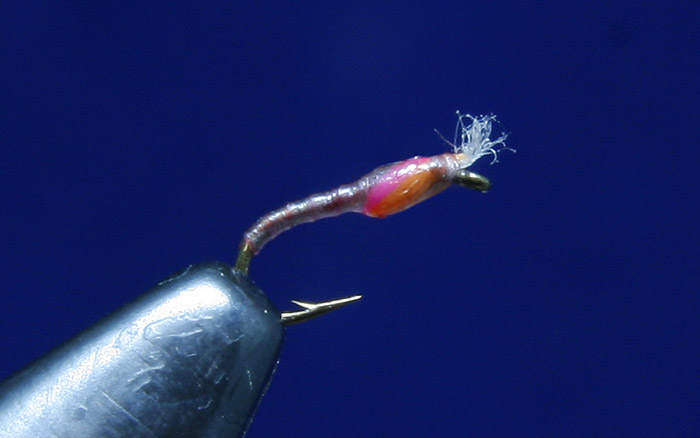 Probably my all time favourite fly, since it first found its way into my fly box well over 20 years ago it’s caught me more fish than any other fly I tie. If I was allowed one fly and one fly only I would take this one. Created by Craig Mathews it’s an evolution of Caucci & Nastasi’s Comparadun which in turn is an evolution of Fran Betters’ Haystack, in terms of translucency of the shuck though it’s very similar to Fran Betters’ Usual. Not a bad heritage all in.
END_OF_DOCUMENT_TOKEN_TO_BE_REPLACED

Early in the Trout season streamer flies can be particularly effective, Trout are hungry and baitfish imitations represent a good meal for a hungry fish. A lot of my early season streamer fishing is done on larger rivers like the Clyde with #4 – #10 longshank Woolly Buggers but Trout will chase and eat streamers regardless of where they live so for my local tributaries I scale down to smaller flies. On the smaller streams where the fish dont have so much time to follow a fly and be enticed by its action I pay a little more attention to profile while still allowing for some movement in the flies materials.This fly fits the bill and catches more than its fair share of fish.

END_OF_DOCUMENT_TOKEN_TO_BE_REPLACED

There are a few fly tyers who really excel at the small stuff, Hans Weilenmann and Andy Baird jump to mind quickly. These guys tie simple elegant micro flies but also some really beautiful tiny flies and they tie them with a high degree of skill, I’m afraid I’m a bit more basic. What I look for in any fly that’s below a size 20 is just simplicity, if I can get the size and shape right I’m happy. If it’ll float for a decent period of time with no floatant applied so much the better as oil slicks around the fly stand out even more when the flies are so small.
So on to a couple of basic fly patterns that cover my needs. Aphids and Caenis.
END_OF_DOCUMENT_TOKEN_TO_BE_REPLACED

In a previous post I went through the steps for creating extended fly bodies. Now it’s time to use them on a Daddy Long legs and a quick simple Danica Mayfly pattern, starting with the Daddy Long Legs.
END_OF_DOCUMENT_TOKEN_TO_BE_REPLACED

In most circumstances I’m not a huge fan of extended body flies but where I happily make an exception and where extended bodies really excel is with flies like the Daddy Long Legs or Danica Mayfly. With those flies you’re not sacrificing hook size or performance when you have the hook shank contain just the thorax of the fly.
So assuming you want extended bodies where do you go from there? Buy in or make your own?

Here’s the tying instructions for how I make mine.
END_OF_DOCUMENT_TOKEN_TO_BE_REPLACED

There are a great many fly patterns to imitate Baetis nymphs, nymphs of the upwing flies in general really, some are very intricate and beautiful pieces of imitative work and others like the Pheasant Tail, Grey Goose or Gold Ribbed Hares Ear nymphs which though very simple are also great fish catchers.
END_OF_DOCUMENT_TOKEN_TO_BE_REPLACED

The most effective dry fly is the one you can see. That statement came up in a conversation amongst a few friends a while back, it wasn’t me who said it but I wholeheartedly agree. What was meant by that was if you can see your fly as it drifts then you can see whether it’s dragging or not.
END_OF_DOCUMENT_TOKEN_TO_BE_REPLACED